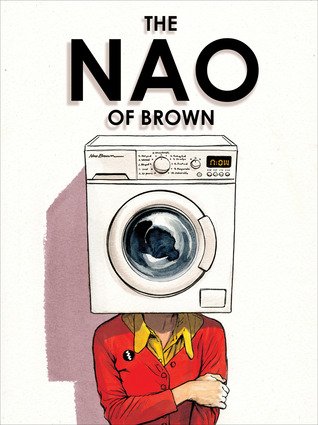 Twenty-eight-year-old Nao Brown, who’s hafu (half Japanese, half English), is not well. She’s suffering from obsessive-compulsive disorder (OCD) and fighting violent urges to harm other people. But that’s not who she really wants to be. Nao has dreams. She wants to quiet her unruly mind; she wants to get her design and illustration career off the ground; and she wants to find love, perfect love.
Nao’s life continues to seesaw. Her boyfriend dumps her; a toy deal falls through. But she also meets Gregory, an interesting washing-machine repairman, and Ray, an art teacher at the Buddhist Center. She begins to draw and meditate to ease her mind and open her heart―and in doing so comes to a big realization: Life isn’t black-and-white after all . . . it’s much more like brown.

Praise for The Nao of Brown:

“Dillon turns in a narrative tour de force, featuring a script that works in perfect concert with almost cinematic art reminiscent of Milo Manara, but with far more expressive characters. A triumph of comics for grownups, this is a must-read.” ―Publishers Weekly, starred review

“The art in The Nao of Brown is absolutely gorgeous . . . An intense story about a young woman who fights as hard to get out of her own head as some superheroes fight to save the world.” ―The Onion’s A.V. Club

“This was the best read I have had in a long time.” ―Scott Stantis, cartoonist for the Chicago Tribune

“Dillon makes his grand return in what can only be described as a visual spectacle.” ―The Beat

“Amazing artwork; a truly novelistic piece of storytelling, full of wisdom and compassion; and a book which is a beautiful artifact, a treat for those of a bibliophilic inclination.” ―Comic Book Resources

“The battles are internal, but no less monumental for all of that. Such inner wars made Sandman a classic, and I have no doubt that Dillon’s graphic novel will likewise be regarded as a seminal work in comic art.” ―The Houston Press Art Attack blog

“It’s a masterpiece, and I really can’t recommend it enough.” ―Comic Book Resources

“Penciled and watercolored by hand, the pages glow with a lush realism, even in their darkest moments. The ever present motif of red can either anchor or engulf the reader, but always provides a vibrant glimpse into Nao’s life.” ―Asian Fortune News