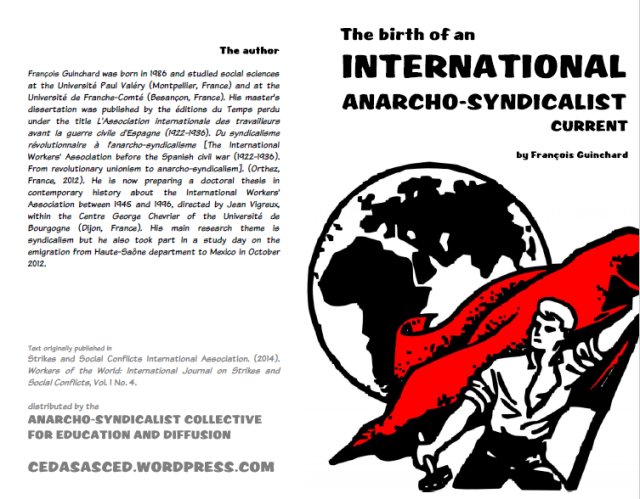 This article charts the historical emergence of an international anarcho-syndicalist current from the beginning of the twentieth century up to the 1930s. It is especially after the First World War and the Russian Revolution of 1917, that syndicalists (or revolutionary unionists), among which were many libertarians, had to specify the meaning of the revolution they advocated. One part joined up with Bolshevism while the other, underlining its anti-authoritarian and federalist dimension, formed an anarcho-syndicalist current. This process led to the foundation in 1922 of the International Workers’ Association (IWA, taking over the name of the First International in reference to its anti-authoritarian tendency), which still exists today despite its marginalisation since the 1930s.

François Guinchard was born in 1986 and studied social sciences at the Université Paul Valéry (Montpellier, France) and at the Université de Franche-Comté (Besançon, France). His master’s dissertation was published by the éditions du Temps perdu under the title L’Association internationale des travailleurs avant la guerre civile d’Espagne (1922–1936). Du syndicalisme révolutionnaire à l’anarcho-syndicalisme [The International Workers’ Association before the Spanish civil war (1922–1936). From revolutionary unionism to anarcho-syndicalism]. (Orthez, France, 2012). He is now preparing a doctoral thesis in contemporary history about the International Workers’ Association between 1945 and 1996, directed by Jean Vigreux, within the Centre George Chevrier of the Université de Bourgogne (Dijon, France). His main research theme is syndicalism but he also took part in a study day on the emigration from Haute-Saône department to Mexico in October 2012.