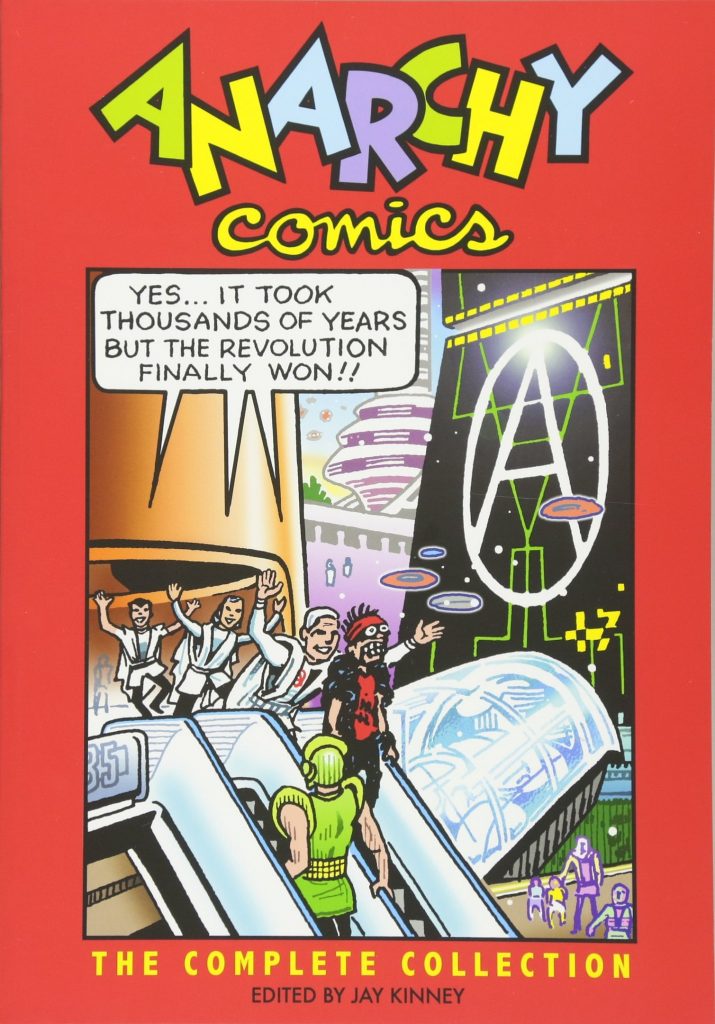 Anarchy Comics: The Complete Collection brings together the legendary four issues of Anarchy Comics (1978–1986), the underground comic that melded anarchist politics with a punk sensibility, producing a riveting mix of satire, revolt, and artistic experimentation. This international anthology collects the comic stories of all thirty contributors from the U.S., Great Britain, France, Germany, Netherlands, Spain, and Canada.

In addition to the complete issues of Anarchy Comics, the anthology features previously unpublished work by Jay Kinney and Sharon Rudahl, along with a detailed introduction by Kinney, which traces the history of the comic he founded and provides entertaining anecdotes about the process of herding an international crowd of anarchistic cats.

“60's counterculture, supposedly political, mostly concerned itself with hedonism and self-focused individualism, as did the underground comix it engendered. Jay Kinney's and Paul Mavrides’ Anarchy Comics, to which all the scene's most artistically and politically adventurous creators gravitated, was an almost singular exception. Combining a grasp of Anarchy's history and principles with a genuinely anarchic and experimental approach to the form itself, Anarchy Comics represents a blazing pinnacle of what the underground was, and what it could have been. A brave and brilliant collection.”
—Alan Moore, celebrated comic writer and creator of V for Vendetta, Watchmen, From Hell, The League of Extraordinary Gentlemen, and numerous other comics and novels

“Anarchy Comics was an education I never got in school. I learned more deep truths about the way human megatribes operate (while at the same time being greatly amused by the superb art and writing) than from any textbook. Decades later, the insights I gleaned from these brilliant comics still affect the way I view global events.”
—Mark Frauenfelder, founder of boingboing.net

“Thrill to this recently disinterred archeological fragment from a lost civilization about to be reinvented. Anarchy Comics is a dream come true.”
—Mark Rudd, founding member of the Weather Underground and author of the recent memoir, Underground: My Life with SDS and the Weathermen

“In the late ’70s and early ’80s we briefly had a comic voice that told our history (IWW, Spanish Civil War, Kronstadt), illustrated our culture (Brecht, communes, Yippies), and skewered our nemeses (Lenin, Mao, Trotsky), all with a large but necessary dose of self-deprecating humor. That was Anarchy Comics, and finally we can read it again!”
—Josh MacPhee, co-editor of Signal, founder of justseeds.org

“Anarchy Comics, revisited here, with an ardent introduction by its principal editor, Jay Kinney, was a wonder of the underground comics world. Perhaps it might be better described as a wonder of the fading comics world, because times had grown difficult for the genre and Kinney was pulling out the stops to show off what was really funny and insightful in the genre at large, extending them into another era. Anarchy belongs to the last third of the twentieth century, and yet has lost none of its power for today's troubled world. Go to the original, reader—look and learn!”
—Paul Buhle, founder of Radical America and Cultural Correspondence, editor of the Encyclopedia of Radical Art

Jay Kinney was an active participant in the underground comics movement from 1968 through the ’70s and into the ’80s. He co-founded the romance comic satire, Young Lust, founded and edited Anarchy Comics, and contributed to numerous other comics. He served as editor of Whole Earth’s CoEvolution Quarterly before founding Gnosis: A Journal of the Western Inner Traditions. His other books have included: Hidden Wisdom, The Inner West, and The Masonic Myth. He recently contributed a chapter on the underground comics movement to Ten Years that Shook the City: San Francisco 1968–1978 (City Lights).