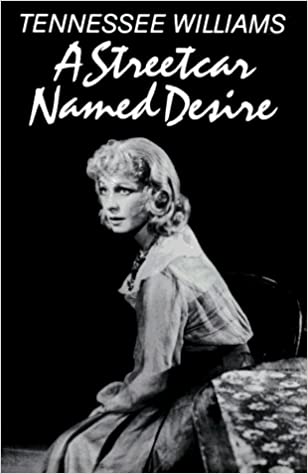 The Kowalski apartment is in a poor but charming neighborhood in the French Quarter. Stella, twenty-five years old and pregnant, lives with her blue collar husband Stanley Kowalski. It is summertime, and the heat is oppressive. Blanche Dubois, Stella's older sister, arrives unexpectedly, carrying all that she owns. Blanche and Stella have a warm reunion, but Blanche has some bad news: Belle Reve, the family mansion, has been lost. Blanche stayed behind to care for their dying family while Stella left to make a new life for herself, and Blanche is clearly resentful by her sister's abandonment of the family. Blanche meets her sister's husband, Stanley, for the first time, and immediately she feels uncomfortable. We learn that Blanche was once married, when she was very young, but her husband died, leaving her widowed and alone.

Stanley initially distrusts Blanche, thinking that she has cheated Stella out of her share of Belle Reve - but Stanley soon realizes that Blanche is not the swindling type. But the animosity between the two continues. Blanche takes long baths, criticizes the squalor of the apartment, and irritates Stanley. Stanley's roughness bothers Blanche as well, since he makes no effort to be gentle with her. One night, during a poker game, Stanley gets too drunk and beats Stella. The women go to their upstairs neighbors' apartment, but soon Stella returns to Stanley. Blanche is unable to understand Stella and Stanley's powerful (and destructive) physical relationship. That night, she also meets Mitch, prompting an immediate mutual attraction.

The next day, Stanley overhears Blanche saying terrible things about him. From that time on, he devotes himself fully to her destruction. Blanche, herself, has a shady past that she keeps close to the vest. During the last days of Belle Reve, after the mansion was lost, she was exceptionally lonely and turned to strangers for comfort. Her numerous amorous encounters destroyed her reputation in Laurel, leading to the loss of her job as a high school English teacher and her near-expulsion from town.

Tensions build in the apartment throughout the summer. Blanche and Stanley see each other as enemies, and Blanche turns increasingly to alcohol for comfort. Stanley, meanwhile, investigates Blanche's past, and he passes the information about her sexual dalliances on to Mitch. Although Blanche and Mitch had been on track to marry, after he learns the truth, he loses all interest in her. On Blanche's birthday, Mitch stands her up, abandoning her for good. Stanley, meanwhile, caustically presents Blanche with her birthday gift: bus tickets back to Laurel. Blanche is overcome by sickness; she cannot return to Laurel, and Stanley knows it. As Blanche is ill in the bathroom, Stella fights with Stanley over the cruelty of his act. Mid-fight, she tells him to take her to the hospital - the baby is coming.

That night, Blanche packs and drinks. Mitch arrives unexpectedly. He confronts her with the stories of her past, and she tells him, in lurid detail, the truth about her escapades in Laurel. He approaches her, making advances, wanting what she has denied him all summer. She asks him to marry her, and when he refuses, she kicks him out of the apartment.

Hours later, Stanley comes home to get some sleep while Stella's labor continues. Blanche further antagonizes Stanley, destroying his good humor, and he responds by mercilessly destroying Blanche's illusions, one by one, until finally he rapes her.

Weeks later, another poker game is being held at the Kowalski apartment. Blanche has suffered a mental breakdown. She has told Stella about Stanley's assault, but Stella has convinced herself that it cannot be true. A doctor and nurse come and take Blanche away to the asylum. The other men continue their poker game as if nothing has happened.